For the last 2 years that I’ve lived here, this has been the vast majority of my Mondays-Fridays. In quaran-time, it’s been more like this:

The new world involves more work, more intentional exercise, and is altogether less interesting. And yet, if I think about going back to how things were in the before time, it sounds exhausting. I should say at this point that I’m aware I’m at the very bottom of people impacted by Covid. I have a job I can do from home, a home with enough space to work, and nobody else to have to organize around. There are things I wish were different in life in general, but specifically related to this crisis, I’m unbelievably fortunate. This piece isn’t about my personal circumstance, though.

Very few of the things we do throughout the day are done by conscious choice. After the first time or two, I never actively thought about how to do the drive to the ferry terminal, or whether I want to walk up the steep hike from 1st to 8th avenue to get to the office, or any of the other autopilot actions that keep us going throughout the day. And the longer we’re unable to do those things, the more those habits are being eroded. We’re going to have to relearn a lot of things.

Not just work-day related things, either. Some of us used to go to church, which meant getting up in time to be presentable on one of the days when you don’t have to. We might pretend to be virtuous and say this was always a positive, thought-out choice, but for most people, most of the time, it was habit. It’s a muscle which is atrophying, one we’ll have to train all over again, and naively we assume it’ll come back naturally. It won’t be easy.

Social interactions are not generally between people equally enthusiastic about them. Some people can’t wait to go meet x friend/check in on x relative/etc., and other people reluctantly go, knowing it’s the right thing to do, and, as with all habits, having had certain mental patterns worn in through positive reinforcement. By the time we get to use them again, the paths we travel down on autopilot will be overgrown with months of anxiety, apathy, and much else besides. It’s difficult to imagine now, because we’re all full of frustrated energy - the positives of brewery patios and coffee shops and whatever else we miss looms large. But it’s coming.

When the starting pistol fires for a return to real life, some people are going to find, perhaps to their surprise, that they don’t want to. It might be you. Or me. But we should be prepared for it. Much good has been said and written about the ways we need to bear with one another as everyone has different and unpredictable reactions to life under lockdown. I think we’re going to need just as much forbearance and patience for all of our unpredictable reactions when we’re eventually released. 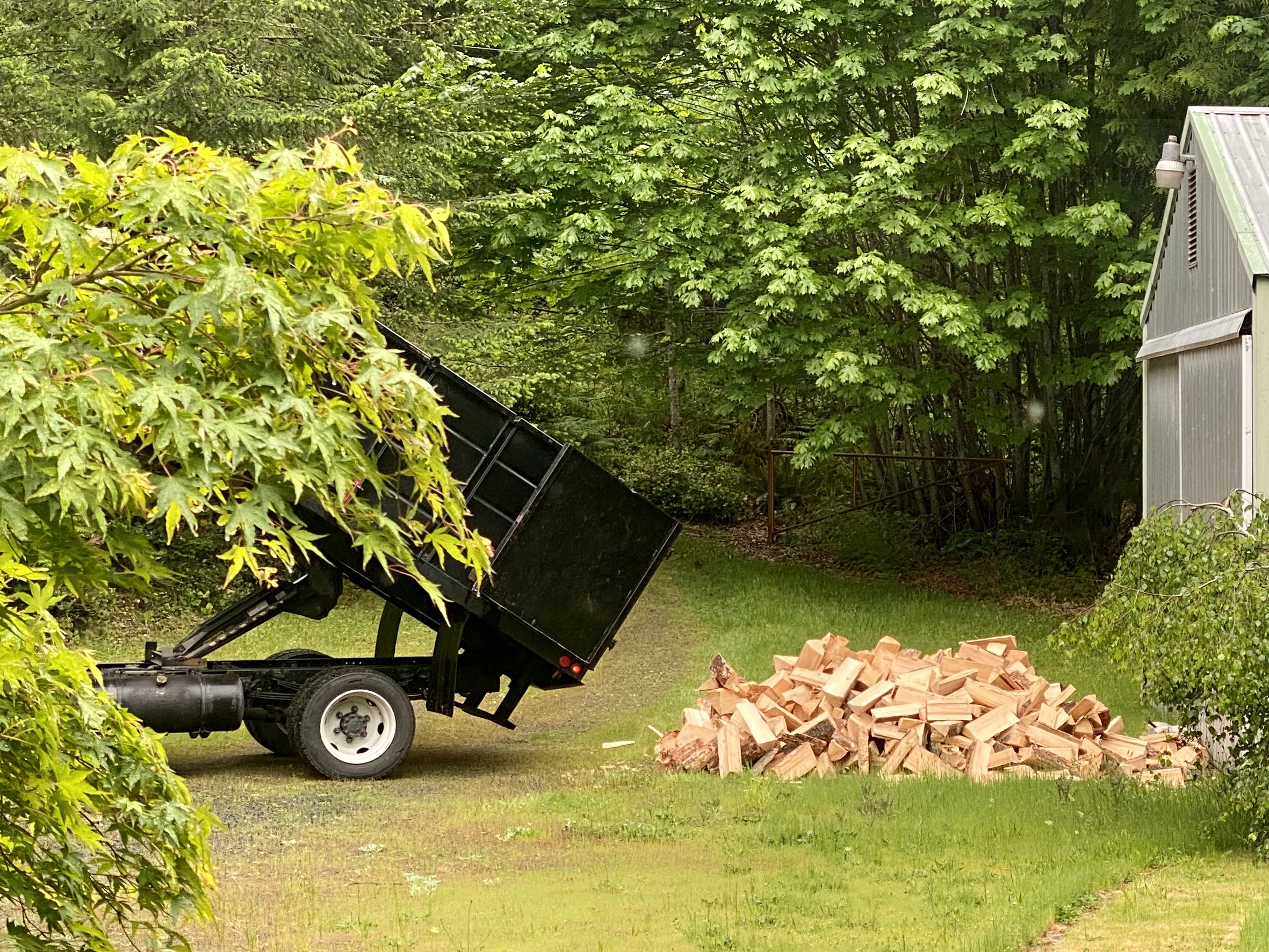 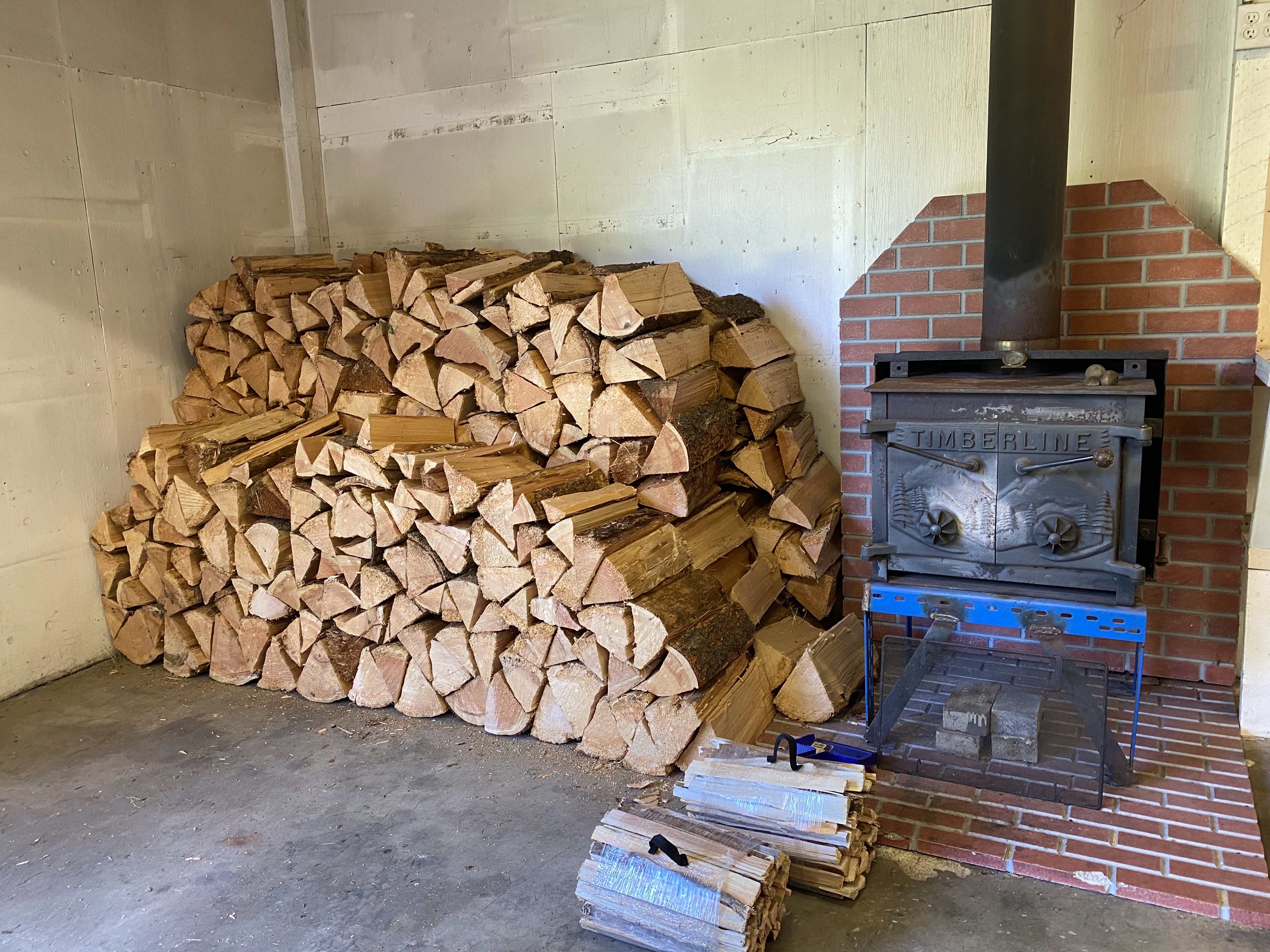 That took longer than I expected.

Good grief, it was 10 years ago today.

A year after our old band played our last gig, I wrote some reflections. Having just rediscovered them, here they are a decade later.

March 12, 2010 – myself, Mike Korth, Will Caudill, and Neil Sheets gathered together with a bunch of friends at the Crabtree Brewery in Greeley, for what turned out to be the last Expiration Date gig. We didn't intend for it to be the last one, but nothing lasts forever, life moves on, and other vague cliches to explain that it just sort of didn't ever happen again. I'm pretty nostalgic by nature, the past almost always looks better after it's happened than it did at the time, and a year since the last gig seems like a good opportunity to remember a couple of my favorite moments.

We had seen a battle of the bands go down in this place the year before, and naively thought "let's come back next year and win this thing." Upon arrival, we discovered that there was only 1 other band competing – our confidence increased at this point, surely we, a band from Nowhere, Colorado, who had played about 2 gigs so far, would be miles better than whatever 'other' band had kindly agreed to open for us. We didn't have any gear in those days, so we spent the hour before the competition frantically trying to borrow drums and amps, then we arrived on stage and realized we'd forgotten to tune our instruments. Several awkward minutes passed as we got everything in tune, and we were ready to begin the set. First, however, I released a very loud, accidental burst of feedback – I wasn't used to the amp, you see. So, with the judges looking at their watches and covering their ears, and with a glare coming from the guy whose amp I'd borrowed that would definitely turn me to stone if I looked him in the eye, we played our first song. I won't speak for the other two, but I know my playing and singing were filled with wrong notes and missed words, it took about 4 minutes into the set for all of our confidence to be blown away. We stumbled through for about 20 minutes, and then took second place. Of 2. The judges comments that particularly stuck with me were "I like your song titles", and "you're on your way to being a good garage band."

This wasn't an Expiration Date show - we'd been asked to come out to a church to play some...well, church music, for an evening – we didn't do any of our songs, but what makes this stick in my mind was the soundcheck: We'd been toying around with a weird song I wasn't really sure about called Back2Earth – we made a run of it in the afternoon to warm up for the Briggsdale gig, and a run of notes came out of Will's bass for the first time that would come to define that song and our band for the next several years. I still dislike the lyric to that song intensely, whining about problems with girls is sort of the lowest common denominator of songwriting, it just always felt like we should have been better than that, but for whatever reason it was a favorite track from this moment until the end. Mainly, I think, because of Will's fantastic bass playing.

Some late night in early 2006, I got an instant message (remember those?) from Will asking if his friend Mike could join the group. Now, in those days I was hesitant to have an opinion about anything in the band – as the front man and songwriter, I felt like I had too much control already, so any time any of the others expressed an opinion, I was pretty eager to do whatever they wanted. So it was agreed that Mike would join us at our next practice. I can't remember why I didn't bother to ask if Mike could play the guitar, but the first practice with him on board revealed that we had forgotten to check that detail. We kept him low in the mix for about 9 months, and he turned into quite a good guitar player – Mike is one of my closest friends these days but I still don't recommend jumping into someone's band without knowing what you're doing as the beginning of a friendship.

This was the only gig we ever filmed or recorded, and I was very pleasantly surprised that we sounded... like a band. I have no idea what has happened to the dvd in recent years, but it was a great night and a confirmation that maybe we were on to something. It seems silly now, but the other thing I recall about that night was how intimidating bars were when we were all under 21. Not only had we come into this place when it really felt like we shouldn't have, but all the people who were coming to see us weren't going to be drinking either... Not a great night for the Toad's bank account, but a wonderful night for us.

During several evenings and weekends over these months, we laid the tracks to an album that will probably never be released. It's almost totally done, but as we don't really exist anymore it feels a bit strange to think about working on it again now. A couple of things learned in the studio – first, in the studio, there are only opinions. On stage, it's a lot more objective – something either works in front of an audience, or it doesn't. If you're unsure, you can try it in front of a few different audiences, but eventually, you'll know. In the studio, you don't have any of that. You can have people you know there with you, you can have some friends listen to some rough mixes... but you only end up with one finished product, and however much you've worked on it, you only think it's great. You don't know. The other thing I discovered in the studio, was that people have opinions different to mine. In live situations, everything goes by so fast that you let most things go, but in the studio, if you play something that someone else thinks is awful... it can be listened to again, and everyone can weigh in. You discover very quickly whether or not you're on the same page musically in the studio, and we are all very different people.

2009 and 2010 were pretty lean years for us, I think we played 3 gigs, of which this was the last. We'd made friends with some people who run some poetry slams in Greeley, and they asked us to play about 20 minutes between each of the rounds... so 5 sets over the course of a few hours – it made for a great evening. Because we'd played so little lately, I was expecting a disaster of a gig, but this worked out really well. They hadn't set up the main part of the brewery where they normally have gigs, because they didn't expect anyone to show up, so we were crammed into a corner by the bar.... which meant the place was pretty packed even if there were all of about 40 people there. It was a hot, loud room, of friends and fans who knew most of the words better than we did, and fittingly, the last song we played was It's the End of the World as We Know It (And I Feel Fine). We "debuted" a new song that night, funnily enough, so that audience was the first and last audience to hear 'I'm Not.' And now, We're Not. 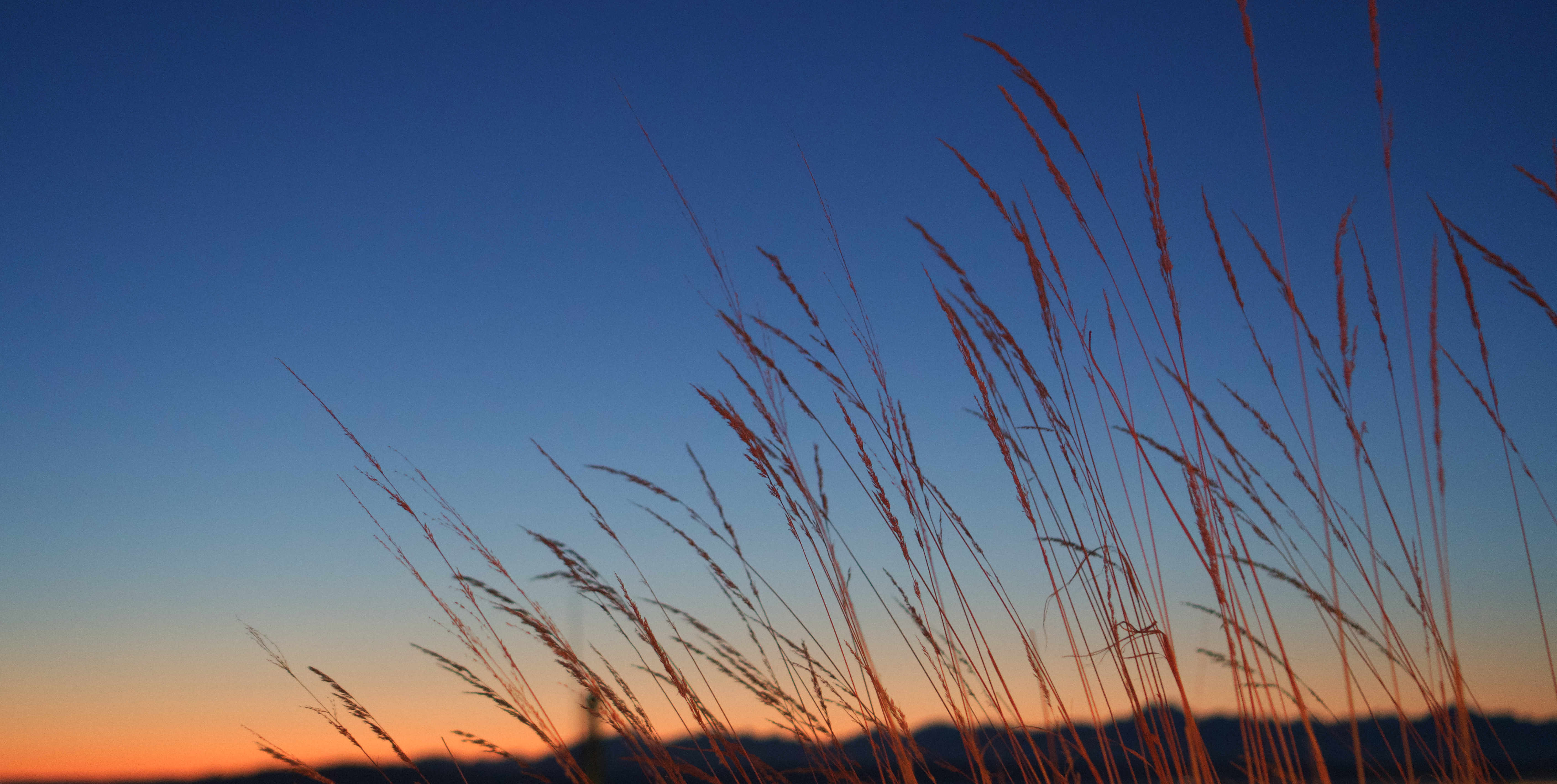 From just outside the Old Stove taproom on the water at Pike Place. 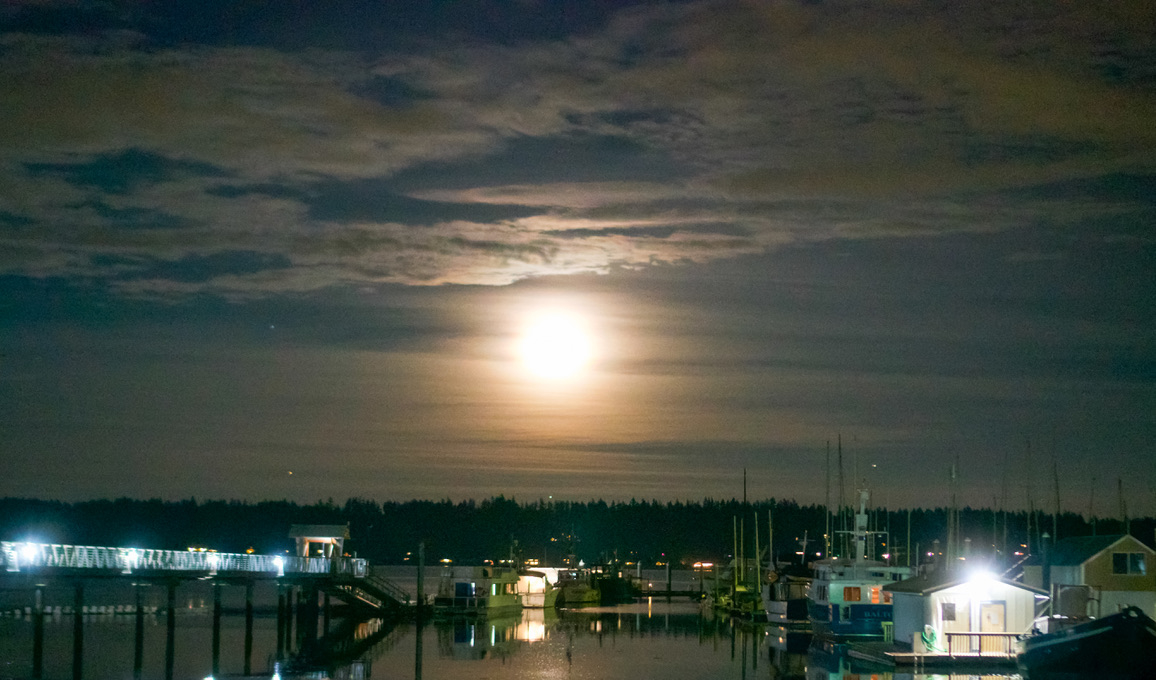 The moon is super hard to photograph without much fancier gear than I have. But I really like this shot anyway.

Pearl Jam will release their much-anticipated eleventh studio album, Gigaton, on Monkeywrench Records/ Republic Records on March 27, 2020 in the US.

This is very exciting news, although they've managed to book a US tour which not only includes no Seattle dates, but includes a Colorado show the week before I was going to be there anyway. I can't win.

Chivalry is not dead. But you soon will be.

Troy, during an intense Starwhal battle.

Twice today I've seen people carrying just-bought trees away from stores. I understand buying gifts in a panic on Christmas Eve, but buying the tree at last minute shows that: 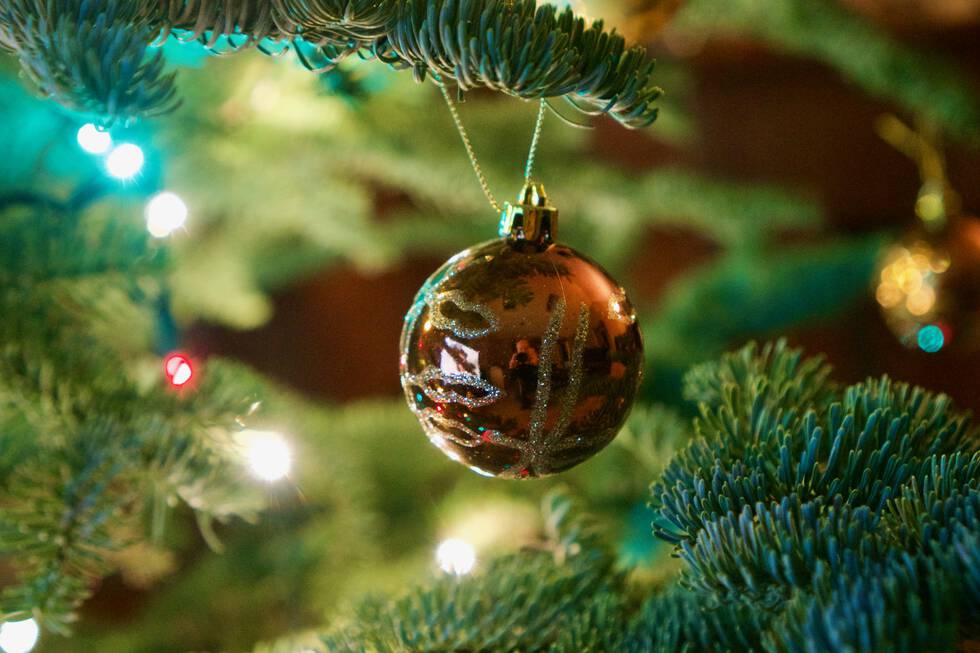 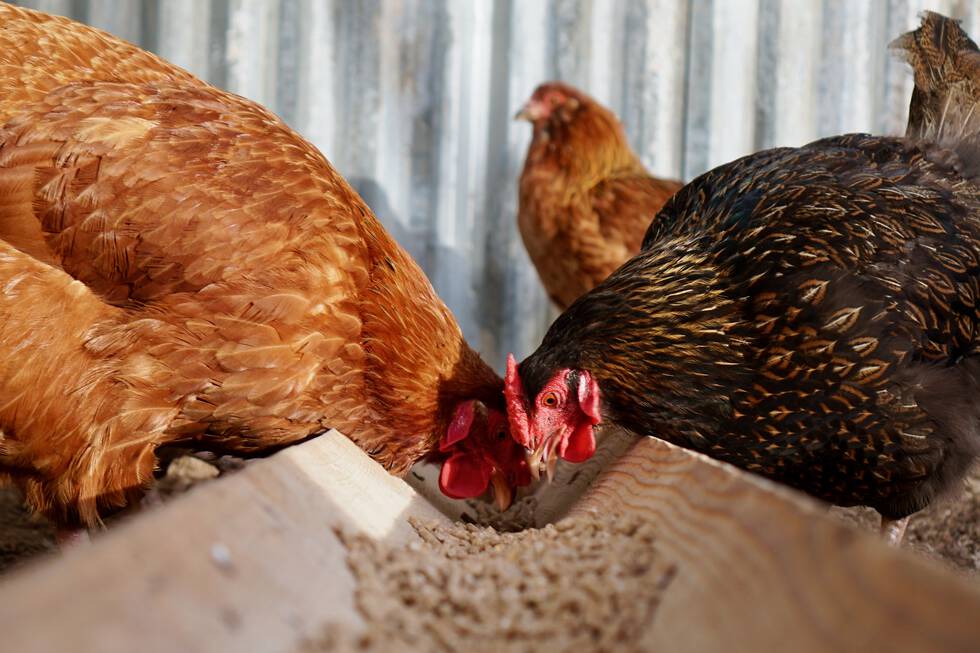